So folks who have known me for a while know I’ve been working with Microsoft operating systems since DOS 3.1, and Windows since Windows/386. Things have come a looooong way since then. I wasn’t a fan of Windows 8, and stuck with Windows 7 until I very recently converted to using a Mac due to that becoming the prevalent machine for web devs.

Credit to Microsoft that the Windows 10 Technical Preview comes in 32- and 64-bit ISOs that drop right into VirtualBox, and they even mention using a VM solution on the preview site so are on board with it. It took a couple passes to get the settings just right, here’s my config if anyone else finds value in it:

The install went very smoothly, but unfortunately the VirtualBox Guest Additions don’t recognize the OS signature so won’t install, but I don’t think I’m going to lose much in testing at this point. For those wondering what the next generation of Windows looks like at this point: 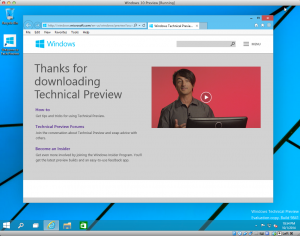 First blush, that annoying home screen is gone, and the start button is back. While not OSX’s Launchpad, it is much more simplified by only showing apps and presenting a Spotlight-like search that finds files, apps, etc on the system to launch. I’m aware the Win7 and Win8 had that search, but it appears to be the focus for the start button in this iteration rather than a shortcut for those who prefer to type what they are looking for. With the Google generation out there, that is probably a good thing. It’s also a more universal and user-friendly interface if Microsoft holds true to porting this OS to phones and tablets as well as any other new platforms they deem necessary.

Another nice new feature is the baked-in desktop manager, which has always been on the wishlist and has always required half-baked implementations (even one by Microsoft as a Power Toy for Windows). 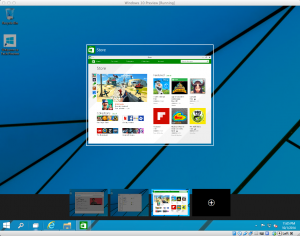 I haven’t figured out how to move apps between desktops yet, but it’s nice to see this is finally a feature in the core OS.

I’m going to keep poking at it with a stick in my spare time and see what else I uncover. Microsoft warns that this shouldn’t be for the weak of heart, and there’s even a quote on their site that shows a little snarkiness from their marketing team:

We’re not kidding about the expert thing. So if you think BIOS is a new plant-based fuel, Tech Preview may not be right for you.

From what I see so far though, it’s pretty impressive and far more stable than the Windows 8 Preview was, and I look forward to playing with it some more!